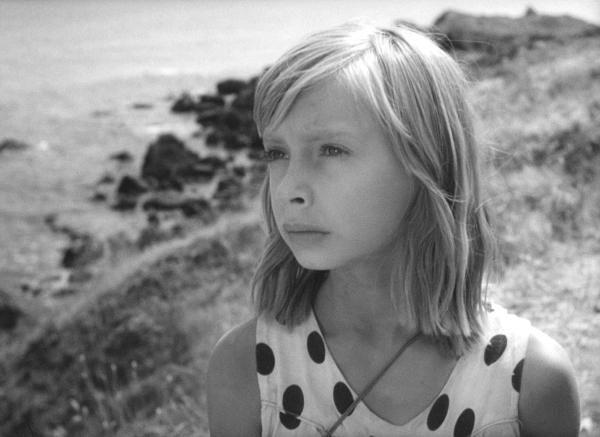 THE GIRL AND THE ECHO

The story revolves around Vika, a dreamy girl on vacation (hence the other title) who loves the sea, mountains and echoes, and does not want to fit in with local kids, and Romas, a boy also on vacation, who does want to fit in, but cannot. The boy becomes her confidant and their friendship blossoms, but then she is harassed by bullies and the boy doesn’t muster up courage to stand to her, which ruins their relationship forever.

The Girl and the Echo (1965; alternatively titled The Last Day of Holiday) by Arūnas Žebriūnas marks the beginning of an important direction in Lithuanian cinema: feature films about children and youth. During the Soviet era, when it was mandatory to follow the ideology pursued by the totalitarian regime, choosing “children cinema” allowed creators to bypass the propagandistic Soviet “relevant issues” and speak about universal problems much more freely. The early movies of Žebriūnas, starting with his directorial début, a cinematic novella The Last Shot (film The Living Heroes, 1960), reveal the inner world of children and raise philosophical questions about the conflict between good and evil and about the moral value of every act of a human being. The director, who had studied architecture, believed in the importance of the visual aspect, which was evident in the film’s refined poetic form and expressive composition of frames. The Girl and the Echo, based on the short story Echo by Yuri Nagibin, was obviously ahead of its time. Using a seemingly simple story line about a girl by the seaside, Žebriūnas demonstrated a new quality of artistic imagination and creativity. This work by a talented creator, unmutilated by the censorship, has inspired many generations of viewers to reflect on the values we are inclined to choose: are they fundamental values, shaped by years and centuries, or temporary priorities, likely imposed on us by the dominant ideology and fake “leaders” in the position of power?

Vika (Lina Braknytė), the main character of the film in a short white dress with black polka dots, as if transferred herein from The Last Shot, has become the symbol of an innocent childhood, a metaphor. Vika is somewhat different from the others, she is much more natural, open-hearted and able to listen to the nature and understand its secrets. Instead of postage stamps or dolls, the girl collects mountain echoes. Even though the script was harshly criticised by Goskin Committee editors in Moscow (for its non-compliance with socialist realism principles), Žebriūnas did not abandon his idea to show the encounter of a child with a sensitive soul and sky-high Crimean mountains and the sea at the foot of them. To quote the director himself when he spoke at the meeting of the contemporary Art Council, “in the film, the nature is not merely a scenery for action, not just a component of the film, but also an important dramatic line because the character Vika is the master of the mountains and the sea.”

The Girl and the Echo is distinguished by its focus on visual aspects and purified aesthetics, which where also significantly influenced by the director of photography Jonas Gricius and his assistants Jonas Tomaševičius and Algirdas Araminas. Freely moving camera, intricately changing layers of perspective, views of Kara Dag rocks from a variety of angles, and vertical and horizontal panoramas help the viewer to feel, rather than just see, the beauty of the mountain range giving it some human-like qualities. The peaks meet the girl with a sunny smile and respond to her calls with roaring echoes. However, when a bunch of brats arrives together with Romas (Valerij Zubarev) who fails to keep their secret and, consequently, their friendship, the mountains suddenly fall silent and hide under a blanket of heavy mist. The sounds had an important role in the film as well. The score by Algimantas Bražinskas adds to the personalities and moods of the main characters. The boys roaming the beach who couldn’t care less about the beauty of the nature are accompanied by noisy rhythms emitted by the radio that create a stark contrast with a light lyric tune that directly reflects the positive world-view of Vika. Focusing on the subtle analysis of his little hero’s feelings and her disappointment after the first betrayal she suffers, Žebriūnas pays less attention to the story lines of the girl’s father (Bronius Babkauskas) and grandfather (Kalju Karm). Still, a great many scenes of the film are eloquent, full of subtexts, allegories or poetic comparisons.

The film premièred at Pergalė cinema in Vilnius on 23 March 1965 but was banished from the theatres after just a few screenings. The most regressive educators of the country were outraged by the nudity of a child (in fact, very ethically shown) and thought it immoral. However, after The Girl and the Echo had been awarded the Grand Prix at the Cannes Film Festival as the best juvenile film, it returned to the cinemas and was seen by more than 6 million people. The movie also received Majority’s Silver Sail at Locarno film festival “for its lyric mood, the freshness of feelings and the beauty of the scenery”, and the jury of the film festival of the Baltic countries, Belorus and Moldova selected Žebriūnas as the best director and also awarded prizes to Gricius for the mastery in cinematography and to Bražinskas for the best film score.