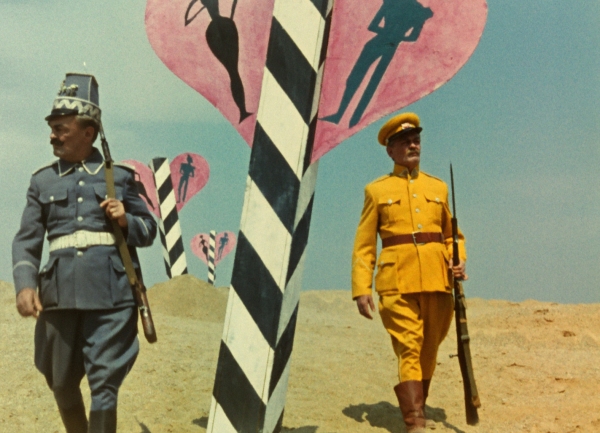 The openly conditional satire of pre-war militarization of Lithuania and the first coloured film from our country.
In two neighbour enemy countries Centia and Groshia lives Zigmas and Jadzė, who truly loves each other. They are secretely going on dates, as the identical border guards let them pass. One morning major of Groshia Varnalėša accidently falls in a sewer hole, he then points to Zigmas and Jazdė as the guilty ones. This accident becomes pretext for yet another war conflict between Centia and Groshia.

March! March! Tra-ta-ta! (1965) is directed by Raimondas Vabalas, one of the most famous Lithuanian directors, the most talented student of Soviet film theorist and director Lev Kulešov. This film was the first experimental piece in the history of Lithuanian cinema, innovative by its genre, music, scenography and composition.

The creative mixing of genre conventions – from melodrama, comedy, pamphlet to political satire – allowed the film’s director Raimondas Vabalas to metaphorically and satirically portray fate of small countries as victims of totalitarian political systems through the story of two people in love. The main story line of the film is the love story of two people wrapped in a pompous form of political satire. The plot takes place in the 1930s in central Europe. A young man Zigmas Ropė lives in a small town on the border of the State of Centia, and his beloved Jadzė Uogytė lives in a neighboring Groshia. Once, Zigmas crosses the state border illegally to meet his beloved Jadzė and the war between the two countries, Groshia and Centia, begins. But the soldiers of Centia, led by Colonel Dilgė, and the army of Groshia, led by Major Varnalėša, are not so much into war, they play a fight fight who will come up with a more ridiculous order. Finally, Zigmas is sent to the front and gets captured, while Jadzė, in an attempt to free him, falls into the hands of the enemies and is sent to a concentration camp.

March! March! Tra-ta-ta! is the first color picture film in the history of Lithuanian cinema. The crew were pressured with a great workload, but they managed to demonstrate ingenuity and creativity. The scenography was created by Russian artist Vladimir Dorer, known as Mozart of scenography (later his work has gained recognition at the Cannes Film Festival). The decorations are very colourful, well suited to the satirical nature of the film, scenes were built on color contrasts (both in costumes and decorations). The film was shot in Švėkšna, a small town of Samogitia. Dorer portrayed the mood of the film in a picturesque manner, decorating the town with colourful cartoons. The modern musical arrangement was created by the composer Benjaminas Gorbulskis, the pioneer of Lithuanian pop music.

In terms of film form, Vabalas was also an novator. He looked at the war between the two neighboring countries from a different perspective – through laughter and grotesque, introducing a new form of narration of cinema by including theatrical performance. The film as a whole is a colorful theatrical scene in which actors dressed in glamorous costumes perform their roles as if they were on a stage in the theater, surrounded by artificial decorations. At the beginning of the film (exposition), we see the director Vabalas filming and introducing the characters. The director describes them, the actors bow to the viewers and step into the white screen canvas in the background. At the very beginning, the director does not allow the audience to identify themselves with the characters: he creates a distinction between the viewer and the future story. The author’s comments, creatively intervening in the film world, seems to encourage the viewer to evaluate the situation as well, and emphasizes that the future story will be developed onstage and is tantamount to fiction. Such a new aesthetic ingenuity stems from Vabalas’ attachment to the theatrical method called alienation effect by his most favourite playwright Bertolt Brecht. His passion for theater goes back to his childhood when he was growing up in Paris. When he returned to Lithuania with his parents, at the age of fifteen, he joined Juozas Miltinis Theater. The theater, which became Vabalas’ passion, later shaped the poetics of his films, and he himself sometimes was an actor in his own films.

Today, the film March! March! Tra-ta-ta! Offers a view to an attempt to deconstruct the postwar totalitarian system and the behaviour of ordinary citizens. In the political-satirical pamphlet, the director depicted the conformist posture of the film’s characters. Vabalas used military satire as an excuse to ask a basic question: What does it mean to stay heroic in war? Is it worth fighting if every fight is just an imitation of the theater of the absurd? If wars are triggered by a simple wild hare that crosses state borders and the love of two people? The film, based on Brechtian aesthetics, can be interpreted as an audiovisual commentary on a previous (as well as present) political situation. The film’s motive – a futile political conformation – was common in Central and Eastern European cinema: in the work of Polish director Andrzej Munk (Bad luck (Zezowate szczęście) 1957) or in The Witness (A tanú, 1969) by a Hungarian filmmaker Péter Bacsó.

After hearing that we are now working on such film, neighbours in Poland wrote a diplomatic note which was sent to Moscow. After that we had a very difficult period, many scenes had to be re-filmed. Headquarters in Moscow wanted the film to be understandable and socially build as anti-fascist. That’s why we have voiceover of Director Raimondas Vabalas and the final scene in black-and-white, which explains what the film was all about. I don’t remember cutting any important scenes, they were just cut short, there was a lot of redundant text, but it was all crucial to save and later to show the movie.