The Lithuanian National Film Awards Silver Crane 2022 (Sidabrinė Gervė) were handed out on Sunday in a ceremony held in the courtyard of the Palace of the Grand Dukes of Lithuania in Vilnius. The exceptional moment of the event was the tribute paid to the film director Mantas Kvedaravičius who had been killed in Ukraine. The speech about the film maker, art and culture was given by the President of Ukraine Volodymyr Zelensky.

“Greetings from Kyiv. I will start my address with a short, but very important quotation: “If we live in certain world, we hear certain songs, listen to certain radio, and watch certain films – all of this creates us and our mentality.” These were the words of Mantas Kvedaravičius. This is how he commented on his own film dedicated to Mariupol. The film by which he wanted to show how the war affected the city, how the war changed people. These rather simple words are actually about the life of people and who they are as people. It is precisely the art and culture, in all their forms and meanings, that shape people and enlighten them. Or on the contrary, imprison them in the darkness and lies. It can be the responsibility of cinema, books, songs and radio. Of everything we hear, see and read. It is for this reason that it is very important to spread the truth, to support the art that is meant for life, not for those who want to destroy that life. The Ukrainian people will always remember Mantas Kvedaravičius as someone who was just that. This man truly deserves the Golden Crane. He cherished life and always used to clearly speak out against things he considered threats to life. It was a very considerate approach. I ask you to maintain the same considerate approach, so that you would also speak up for life, so that you would not forget Ukraine, Mariupol and the fact that the war that took Mantas’ life is Russia’s war against Ukraine. It must end. End as soon as possible. Thank you for your attention. Slava Ukraini!” Zelensky said in a broadcast.

The Golden Crane is the most honourable award given for lifetime merits to the Lithuanian film industry. During the ceremony the award was announced by the Prime Minister of the Republic of Lithuania Ingrida Šimonytė who handed it to Banguolė Kvedaravičienė, mother of the late Mantas Kvederavičius.

As reported by lrt.lt, on April 9 the human rights ombudsman of Ukraine, Liudmila Denisova, said that Mantas Kvedaravičius allegedly “was imprisoned by “rashists” who shot him down later and threw his body on the street.” Having heard from a Ukrainian man who was detained together with her fiancé, Hanna Bilobrova believes that soldiers fighting on the Russian side shot Kvedaravičius to death on suspicion that he was a secret sniper from Lithuania, a NATO country. As proof that he was firing from a gun, the soldiers considered a bruise found on his shoulder, which could actually had been the result of wearing a backpack.

Thanks to the heroic efforts of Bilobrova, the director's body was transported to Lithuania, and the footage of his documentary about Mariupol, which he filmed during the war, was preserved.

Hanna and Kvedaravičius’ colleagues who also worked with him in his previous films, namely, the film editor Dounia Sichov, Rana Eid, Lama Sawaya, Sherif Allam, Rob Walker (sound editing and mix), Mindaugas Galkus, Mykolas Tuita, Ovidijus Talijūnas (video post-production); producers Uljana Kim, Nadia Turincev and Thanassis Karathanos had pooled all their effort to make a première of Mariupol 2 in Cannes, at the official selection programme Special Screenings where the documentary received a special documentary prize. The film will be distributed worldwide by a highly experienced and well-known company The Match Factory.

The National Film Awards Silver Crane on Sunday were also presented to two extremely strong Lithuanian films, which had already reached a very wide global film market. The film director Giedrė Žickytė's The Jump, which tells the incredible story of Lithuanian Simas Kudirka's leap into the free world during the Soviet era, won the title of the Best Documentary of the year. This film has already received 8 international awards and is currently being distributed in the U.S. and Canada via Apple, Amazon and other platforms. As of June, The Jump is playing in movie theatres across U.S.

In the event, Žickytė also accepted the Best Minority Co-production Award for The Earth Is Blue as an Orange (directed by Iryna Tsilyk, produced by Giedrė Žickytė). The documentary portrays the life of a family living on the front-line in Donbas, Ukraine. It won the Directing Award at the prestigious Sundance Film Festival (US).

The Silver Crane was a big celebration for the film director Laurynas Bareiša’s team as his film Pilgrims was recognized as the Best Feature Film and won the nominations of Best Director, Best Screenwriter and Best Actor.

Pilgrims has already had its historic moment of winning in the Venice Film Festival, and as of August this Lithuanian film will be available to millions of viewers in Central and Eastern Europe: the film distribution company Reason8 has signed a deal with HBO, the premium cable TV platform. Another deal has been settled with the film distribution company Dekanalog, and in the coming year the psychological drama Pilgrims will reach the audience in Northern America.

Next to the major awards LKC and AVAKA presented a special prize to the Vilnius Film Office for the long-term promotion of film production in Vilnius, professional assistance to film producers and makers as well as efficient facilitation of investment in film production. Recently, Vilnius has become a very attractive destination for foreign film production companies.

The Earth Is Blue as an Orange (directed by Iryna Tsilyk, produced by Giedrė Žickytė) 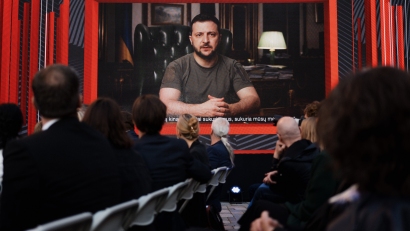 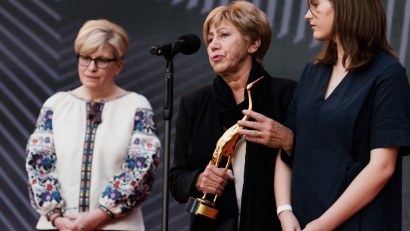 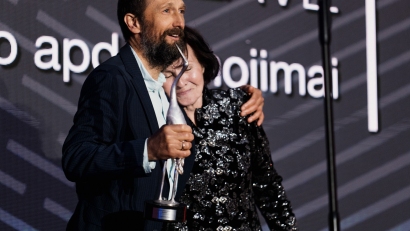