The 15th T-Mobile New Horizons film festival opens in Wrocław on July 23. Among other films it will feature the most distinct Lithuanian films created from 1959 to 2015. The special film programme Focus on Lithuania includes a record number of 30 features following the complex history and culture of the country during the Soviet period, the path to independence, and the decades of sovereignty.

Focus on LT cinema leidinio virselis“The festival draws over 600 professionals from the film industry each year”, says Rolandas Kvietkauskas, the director of the Lithuanian Film Centre (LFC). “Participation in such events by the Lithuanian filmmakers promotes the name of our country and opens up opportunities to make international contacts and to start co-production projects with neighbouring countries.”

The retrospective of the works of the filmmaker Šarūnas Bartas is the key part of the programme presented at the T-Mobile New Horizons festival. Nine of his films will be offered for the viewers: the debut film Praėjusios dienos atminimui (In Memory of a Day Gone By, 1989); the loosely structured, minimalistic and philosophically loaded films Trys dienos (Three Days, 1991), Laisvė (Freedom, 2000), Namai (The House, 1997), Koridorius (The Corridor, 1995), Mūsų nedaug (Few of Us, 1996), Septyni nematomi žmonės (Seven Invisible Men, 2005), and Eurazijos aborigenas (Eastern Drift, 2010). Bartas’ latest film Ramybė mūsų sapnuose (Peace to Us in Our Dreams), which premiered in the Director’s Fortnight section at the Cannes Film Festival, will also be screened at the Wrocław Film Festival.

The Focus on Lithuania programme also includes the legendary films that brought fame to Vytautas Žalakevičius – Adomas nori būti žmogumi (Adomas Wants to be a Man, 1959), Vienos dienos kronika (Chronicles of the Day, 1963), and Niekas nenorėjo mirti (No One Wanted to Die, 1965). Festival-goers will see the works of Almantas Grikevičius who debuted in feature film in 1968 – Sadūto tūto (1975), Faktas (The Fact, 1980), which is still the only Lithuanian film to ever enter the main programme of the Cannes Film Festival, and Jausmai (Feelings, 1970), a drama created in collaboration with Algirdas Dausa and elected the best Lithuanian feature film of all times by the national film critics in 1995 celebrating the century of cinematography.

The programme in Wrocław will also present the recently restored and digitised film Gražuolė (Beauty, 1968) by Arūnas Žebriūnas. The viewers will see Maža išpažintis (A Short Confession, 1971) by Algirdas Araminas. The theme of youth will be further explored in the early films of Raimundas Banionis – Vaikai iš “Amerikos” viešbučio (Children from the Hotel America, 1990) and Džiazas (Jazz, 1992).

Authenticity of different periods of history will be revealed in Valdas Navasaitis’ film Kiemas (The Courtyard, 1999), and the sarcastic Gytis Lukšas’ tragicomedy Mėnulio Lietuva (Lunar Lithuania, 1997). Film aficionados will also see Algimantas Puipa’s films Bilietas iki Tadž Mahalo (Ticket to the Taj Mahal, 1990), and Nuodėmės užkalbėjimas (Whisper of Sin, 2007). Historical storylines and complex moral dilemmas will be unfolded in the dramas Kai apkabinsiu tave (Back to Your Arms by Kristijonas Vildžiūnas, 2010) and Ekskursantė (The Excursionist by Audrius Juzėnas, 2013).

The New Horizons Studio workshop that will take place at the Wrocław Film Festival will be attended by two representatives from Lithuania – the filmmaker Giedrius Tamoševičius and the producer Marija Fridinovaitė. Directors and producers from across Europe taking part in the workshop will find out about the dealings of the international film market, meet experts, and discuss their projects and career plans. Among other lectors and guests, the workshop will be attended by the producers Gavin Humphries, Raymond Phathanavirangoon, Guillaume de Seille, David Pope (London Film Academy), and Ewa Puszczyńska – the producer of the Academy Award-winning film Ida.

The T-Mobile New Horizons film festival in Wrocław is the second of the three Polish film festivals featuring Lithuanian films. A programme of Lithuanian documentaries was already presented in Kraków Film Festival in June this year. A separate programme is made for each of these events, while young producers and directors are included in relevant international workshops and participate in the most important film industry activities. A special publication on the contemporary Lithuanian film and the relationship between the Lithuanian and Polish cinematographers published in English and Polish languages is distributed at the above mentioned festivals.

“The neighbouring Poland with its strong film industry and excellent pieces of cinematography is our strategic partner this year”, says Liana Ruokytė-Jonsson, the head of the Film Promotion, Information and Heritage Department at the LFC. “The presentation of the achievements of Lithuanian cinematography with the status of the key guest country in the major Polish film festivals is of great importance to us. This is probably the most prominent international presentation of our films during the past several years. And of course this promotes closer collaboration between Lithuanian and Polish professionals.”

The presentation of Lithuania at the T-Mobile New Horizons film festival was organised by the Lithuanian Film Centre in cooperation with the Lithuanian Embassy in Poland. 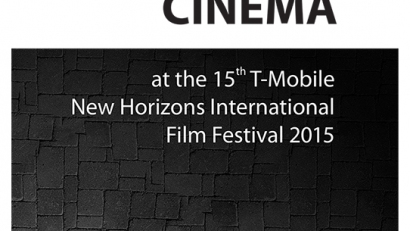