Cinema hall expands its range of films and countries. In order to offer the audiences a more intriguing repertoire, the film hall screens programs from different countries.

‘Film Spot LT’ is located in the renewed departure area of Vilnius Airport next to the gate A2. Its working hours are adapted to the flight schedule – films are shown from the first to the last flight of the day. The cinema hall has 50 seats. One of the main issues was to decide which space at the airport is the best form this project as well as the selection of an architectural solutions. It was important to create a space that is designed not only for convenient film watching, but also attract the attention of passengers and encourage them to come in and experience. The aim was to make this on of the airports exclusivity sign. Therefore, as an accent of the outer space architects designed entrance that has been designed as a massive also delicate black tunnel, which illuminate the inner countours of it’s shape. The overall dominant style both inside and outside is minimal style in monochrome palette. In order to put a little playful accent, in the hall 2 chairs are red, while the remaining 48 are white chairs.

People’s reaction was (and still is) great. Especially a lot of traveling young people who are interested in Lithuanian cinema news, for them it was an excellent opportunity to get acquainted with their country’s cultural works. A lot of positive feedback about the project was not only in social media, but also from the airport’s partners who was fascinated by a beautiful non-commercial initiative. It’s really interesting that even those people who never go to the cinema are now visiting the cinema at the airport – some visitors are even coming to the airport extra early to check in so that they come and see the films. 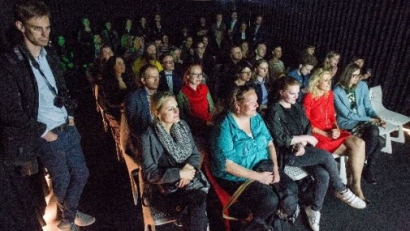