What a year it has been for Lithuanian cinema! As one of the most prominent Lithuanian film director Sharunas Bartas held a World premiere ‘Peace to us in our dreams‘ at the Cannes Film Festival, director Alante Kavaite won the Directing Award at Sundance Film festival with film ‘The Summer of Sangaile‘.

We are extremely happy and proud that among 52 best films of the year THE SUMMER OF SANGAILE and PEACE TO US IN OUR DREAMS are the part of European Film Academy Selection 2015. 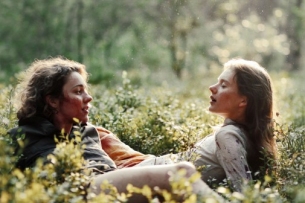 The film tells the story of the 17-year-old Sangaile who is fascinated by stunt planes. Her biggest dream is to become an aerial acrobatics pilot. But she can‘t achieve it unless she overcomes her fear of heights and lack of confidence. For Sangaile, that seems to be impossible. One day she meets charismatic and enthralling Auste, the antipode of herself, at the summer aeronautical show near her parents’ lakeside villa. Sangaile allows Auste to discover her most intimate secret and in the process finds in her teenage love, the only person who truly encourages her to fly.

The  world premiere took place at the Sundance Film Festival, where Alante Kavaite won Directing Award, on February it was selected at the Berlinale‘s Panorama.  Film has traveled around 50 festivals this year, and was screened in Los Angeles, London, Paris, Berlin, San Francisco, Sydney, Zurich, Karlovy Vary, Edinburgh, Bogota, Busan, Warsaw. This is the first Lithuanian LGBT film. It is also an official Lithuanian entry for the Oscar as Best Foreign Language Feature. Actress Aistė Diržiūtė has been shortlisted among the ten talented newcomer actors selected for the European Shooting Stars 2015.

Šarūnas Bartas PEACE TO US IN OUR DREAMS

One summer day, a man, his daughter and his companion arrive at their country house to spend the weekend. The daughter has just moved in with her father, whose attention she desires. The man is tired of his life, and does not know where to find the strength to carry on living. The woman, a violinist, is confused in her priorities – music, love or career.