Lithuanian cinema – in the limelight in Poland

“We hope that the Krakow Film Festival will be a perfect opportunity for its quests and visitors to get to know and come to appreciate Lithuanian cinema. Furthermore, we seek to create opportunities for Lithuanian and Polish film-makers to meet and discuss co-productions possibilities”, said Roland Kvietkauskas, director of the Lithuanian Film Centre.

At the 55th Krakow Film Festival Lithuania presents a special program of 15 documentary and short films released in the last three years.

Giedrė Žickytė’s film How We Played the Revolution has officially opened the Lithuanian program. The newest work of this Lithuanian director – Master and Tatiana – will compete in the festival’s International Documentary Competition.

The delegation of Lithuanian film-makers participate in Krakow Film Festival and its film industry events. Tomorrow a special industry conference will take place. Its spotlight – Lithuania. Lithuanian producers, distributors and exhibitors, film critics, representatives of Lithuanian Film Centre will share their insights and experiences about documentary filmmaking environment in Lithuania.

More over Lithuania will present two projects  in the film industry event “Doc Lab Start”: Alexander the Grand by P. Juočeris and V. Puidokas, and People, Animals and Things by A. Žegulytė and G. Burokaitė.

Krakow Film Festival  is the first of three Poland film festivals, where Lithuanian cinema will be presented this summer. This is one of the biggest presentation of Lithuanian films in recent years in Poland. Lithuanian Film Centre will offer carefully prepared programs for each festival. Special edition about contemporary Lithuanian cinema was published in English and Polish languages for this occasion. 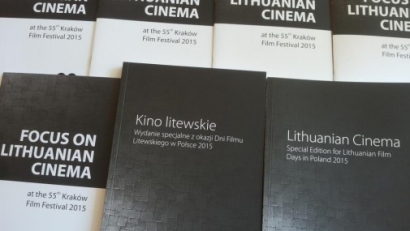